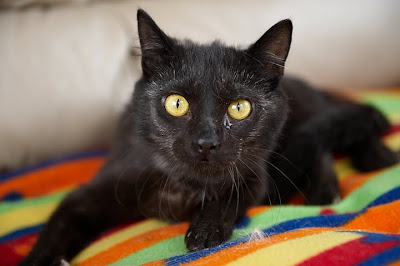 On the left is one of our newest cats. This is Spyder a six month old kitten,named for the manufacturer of my ski jacket and also for the late ski racer Spyder Sabich. He( Spyder the skier) was killed by his girlfriend, the former wife of singer Andy Williams, Claudine Longet.( Remember them?) Spyder the kitten kind of looked like a daddy long legs as he walked,picking up one foot after another very deliberately.But I also wanted to give Spyder,the kitten,who has hyperplasia cerebellum( like cerebal palsy,caused by pre-natal distemper infection) the name of a skilled and celebrated athlete to imbue him with the courage he would need to live as much as possible like a normal cat. Spyder was found outside in rural Wisconsin, the runt of a litter of kittens born outside. The people who brought him to HFL late last fall( actually bringing him to the Mall of America while we were at our Holiday Event) did not believe he would survive the winter on his own with his disability. Spyder is very bashful, and we have never heard him meow. He is still small for his age. He absolutely loves to be pet and leans into your hand at the slightest show of attention and affection.Thank god he was not left outside this winter to starve and freeze. 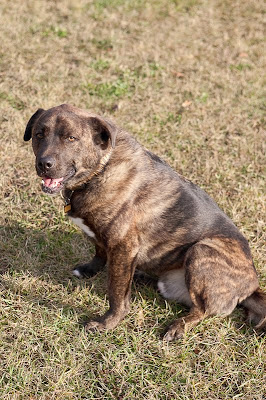 I have named some of our other physically disabled animals after athletes but I may have to rethink this practice.

Before Spyder, I named a young disabled dog Tiger- after Tiger Woods. Tiger is pictured on the far left. Tiger the dog came to HFL in 2007 with deformity of the hind legs caused by malnutrition. He underwent two separate and complicated orthopedic surgeries to correct the legs to give him some hope of having the ability to walk and run without experiencing pain -he was only 6 months old when he came to the sanctuary and could not run or even walk without severe pain. The surgeries were mostly successful although Tiger still stands somewhat knock-knee-ed. He does run and walk now,though he seems to get more tired than a dog his age should. Tiger went on to complete the Renaissance program and become a therapy dog. He also stumped the Canine DNA kit when a reporter from the St. Paul Pioneer Press tried it out on him. She took an inner cheek swab and sent it into the DNA company for analysis but they could not determine his heritage.Tiger's breed mix is anyone's guess,but he looks like like he could be part lab,pit bull and ??
Meanwhile Tiger Woods, the golfer, Tiger's namesake, has his own problems- coming in 4th in the Masters, the Vanity Fair magazine article,ect.
Have you ever read those articles about naming children? It seems important to give a child a popular name if you want them to be popular,successful ect. So naming a girl Winifred may create alot of problems for a kid whereas if they had a sweet or cute name like Ashley,Christie,ect they will have less hurdles in life. A name,your identity and what you are called,even for an animal can help make life easier. Giving our animals who already have challenges the name of a popular and gifted athlete seemed a way to give them a boost in what could undoubtedly be a difficult life.
The turn of events for Tiger the golfer has been very shocking to say the least and nothing that we could have anticipated when we named Tiger the dog after him in 2007. When we thought of naming our dog after the great golfer, we thought of his incredible athletic talent, his drive,his focus and his success. With all that has happened to the golfer, we could just say that Tiger the dog was named for his brindle coat. But we were not thinking of Tiger Wood's personal life when we named our beloved puppy after him; we just wanted to give him a name full of hope for better days ahead when he could move gracefully,with ease and without pain .
Posted by Home for Life Animal Sanctuary on Monday, April 12, 2010