With another two feet of snow on the ground as of today and another snowfall expected later this week, a blog post about winter at the sanctuary seemed timely.

Home for Life is located in Star Prairie,Wisconsin, just over the St. Croix River from Stillwater, Minnesota, and we experience four distinct seasons. Winter seems like the longest season, lasting from approximately mid November through the end of March. At Home for Life we experience the range of temperatures with each season, and so must cool our buildings when the summers are hot and humid and heat them in the winter. While all our buildings are heated and air conditioned, including all of our 15 townhouses, they are spread out over several acres so the staff spends alot of time outdoors, going in and out of the buildings to check on the animals every hour. Coping with the extremes of the weather, and the elements is a big challenge of the job . This winter has been especially brutal : for example,one morning in January the air temperatue registered -30 degreees. That day, it was still below zero at noon. With the windchill, it was oppressive and dangerous to be outside for any length of time.

Each townhouse and the apartments of our dog buildings have attached runs with one or more gates,as do the 4 fenced meadows we use to exercise the dogs: after a snowfall, each gate must be shoveled out so we can swing them open and closed. To access the property after a heavy snowfall, the long driveway, and all the areas in front of the buildings must be plowed and paths to all the buildings and townhouses shoveled or plowed with a snowblower. Yesterday,with over two feet of new snow, we plowed out the driveways and roads TWICE, at 1 am in the morning and again 9 hours later when the snowfall finally stopped. Winter has gone on so long, with the cold and heavy snows, that it seems like it will never end. It becomes almost impossible to remember what the summer weather was like just a few months ago, let alone imagine that it will ever be sunny and warm again.

Two weeks ago we just had a nice melt of the huge amount of snow we received earlier in the season, and temperatures were in the high 40s and even reached 50 degrees one day. So it was demoralizing to have yet another huge snowstorm to contend with today. We still have about six weeks more of winter to get through til spring with March, the snowiest month, yet to come.

This time of year it helps to think positive thoughts about winter and especially about snow.

Here is my list of all the good things about winter at Home for Life:

1. we don't have to worry about weeding our huge gardens or getting the lawns mowed

2. the snow makes everything look clean and covers up alot of things like fluff from toys and cushions the dogs have destroyed, poop we missed when scooping, the holes that the dogs dig in their runs and in the meadows, and Home for Life's huge septic system with the cement tankcovers and chimney's sticking out of the ground.

4. the snow looks festive on our many pine and spruce trees

5. we can see the tracks of the many wild animals who live on the sanctuary property: about half of our forty acres is used for the sanctuary facility;we have left about 20 acres natural and undeveloped, and this land includes a wetland, hardwood forest, river frontage on the Apple River and prairie meadows. Over the years, we have spotted black bear, eagles, deer, coyotes, foxes, rabbits and opposums among other forest creatures. I call this part of the sanctuary "the other Home for Life", reserved for the wild creatures.

6. the colder temperatures and snow eliminates most bugs and parasites; ticks and fleas can't survive subzero weather. Nothing is more cleansing than a good freeze.

7.it is much more comfortable to work in the winter as long as you bundle up and wear a hat. In the middle of summer, when it is 90 degrees with coresponding humidity, even air conditioning cannot take the edge off, and the heat makes animals and staff alike feel prostrated with exhaustion. In the winter, the animals can exercise without the risk of heatstroke.

The best thing about winter is watching the fun the dogs have playing in the snow.

Most of the Home for Life dogs love the snow. We have been trying to raise the money we need to build an indoor exercise and training building for a while now. We envision it like an indoor horse arena where the dogs can exercise indoors when it is cold. However, most of our dogs enjoy the winter weather, and love getting outdoors year around. Unless it is way below zero and a cold wind blowing, they love being outside. There is nothing prettier or more exhilirating than a sunny winter day with clear blue skies and fresh, crisp air. As long as there is no cold north wind, that winter weather creates conditions that are just about perfect for the dogs to be able to run and play, and they definitely enjoy being outside.The snow provides a great cushion for them to run,especially for the older dogs. What dog doesn't relish rolling around in a fresh snowfall? I think even if we are lucky enough to raise the money someday for the indoor arena,we will still let our dogs outside to exercise whenever the weather permits.

Below are two of my favorite photos of our dogs playing in the snow: Muffy the black schnauzer and Monty the sheltie play in the lower meadow in this photo. Muffy was very timid when she first arrived at Home for Life. She had been taken in by a rescue group who saved her from a puppy mill. Muffy was born with spina bifida and was going to be put down at the time she was rescued. At Home for Life,she was very shy of the other dogs, and sat quietly without saying anything,shrinking back in her kennel from attention or interacton. Monty came from a neglectful,harsh home and at age 3, is one of our younger dogs at Home for Life. He had come to Home for Life about 18 months before Muffy. A few months after he arrived, we tried to involve him in the Renaissance Program, where he would be trained by a student with the goal of becoming certified for therapy work. But Monty, having never had any confidence instilled in him as a puppy, was too insecure and intimidated to participate and would freeze in place during class. His whole security came from being at the sanctuary at Home for Life,where he felt safe. He lived in the feline leukemia building with some of our more gentle and sedate dogs. While they were gentle with Monty, he lacked a playmate with comparable energy. This photo captures the first time Muffy and Monty were let out in the field together. Forgetting their sad pasts, they had a blast playing and haven't stopped playing and smiling since! Muffy now lives in the feline leukemia building with Monty, so they are now fast friends and her true terrier personality has emerged. 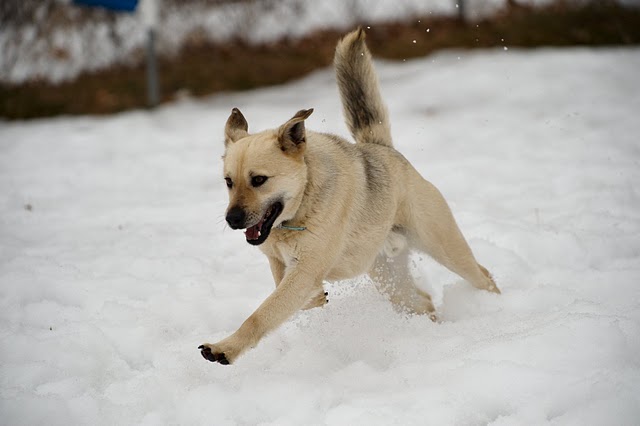 Ben is a small sheperd mix who came to Home for Life as a puppy. He was surrendered by the Animal Welfare League of Chicago. Chicago police officers witnessed a group of boys beating Ben to a pulp.Even the hardened cops were horrified.They stopped their squad,jumped out and chased the boys away. They picked up Ben,who was unconscious, and rushed him to the League shelter . Ben was in a coma for several days as a result of the beating, and it was touch and go whether he would even live. The shelter staff fought for his life and pulled him through. When Ben was about three months old, the Animal Welfare League surrendered him to Home for Life.

Sadly, as a result of the beating, Ben is blind. ( HFL had his eyes checked by a veterinary opthamalogist at the University of Minnesota Veterrnary Medical Center, and they are normal,but the lesion on his brain from the beating had left him blind). Ben is also clearly brain damaged as a result of the beating and, learns much more slowly than other dogs. For example, walking on a leash has been hard for him to master. Most often Ben can be found sitting quietly on his hammock listening to the activity around him. He knows his name, can get around his dog run and through the dog door to his apartment but has never learned to climb the stairs to the exercise run. Ben lives with a group of very kind dogs (Wyley's group profiled in our 2010 newsletter) who are very protective and gentle with him,yet who make him feel a part of the pack.

The day this wonderful photo was taken we carried Ben up in the exercise field so he could play in the fresh snow with the rest of his dog group. In a way,this photo was startling- it was surprising to see another side of Ben- so joyful and happy and observe him playing so enthusiastically in the snow with the other dogs. With animals at HFL like Ben who have had such terrible pasts, it is hard to focus on anything but their prior suffering and tempting to define and identify them by those prior experiences i.e Ben becomes identified as and thought of as "the puppy who was beaten and is now blind and brain damaged". Muffy is "the dog from a puppy mill" and so on .What happened to them before they arrived at Home for Life is so heartwrenching that it is hard to get beyond the tragic past when thinking about them. But animals know better than to let their past circumscribe them. For us who care for the special needs animals, we have to be able to imagine that a better future for them is possible to give them that chance,especially when considering dogs and cats who haven't suceeded in traditional animal shelter environments or in typical homes. If given half a chance they seize any opportunity for the hapiness all creatures yearn for,rather than letting a difficult history or present circumstances define and limit them forever.

For more great photos of Ben, Muffy and Monty playing in the snow please see Mark Luinenburg's photo album . And, here is a short video of some of the Home for Life dogs playing in the snow in one of the meadows at the sanctuary. Featured are Lily the cavalier/aussie, Spiderman the sheltie/eskimo and Channing a senior black standard poodle.