﻿Among our animals at Home for Life are several bonded pairs of friends who were fortunate to be able to remain together when their owners gave them up.

Batman, below is a boston terrier/pug/chihuahua cross ( my best guess) and Pumpkin,who suffers from pempigus foliaceus, is a small mixed breed of unknown origin. They were confiscated from an owner who was driving through Western Minnesota from Las Vegas. The woman and her companion also had two small kids in the car. They were on their way to Chicago when arrested for trafficking child pornography. The sheriffs took their kids into protective custody and the dogs to animal control. The animal control officer called Home for Life, shocked at Pumpkin's condition, knowing she would never make it out alive of the shelter. Batman was arguably "adoptable" but the sheriffs and animal control did not want to separate the two dogs who were frightened and tramautized, clinging together. Pumpkin's condition needed intensive treatment including medications, food supplements and regular therapeutic baths, while the impact to Batman was more of a psychic injury. He cowered and shrank back if anyone looked at him. Despite her disfigurement Pumpkin actually seemed more resiliant and hopeful. Maybe she was down so far she had nowhere to go but up. The sheriffs elected to send both dogs to Home for Life where they could heal in body and spirit while supporting each other. This photo below was taken just ten days after they arrived, and they still seem haunted by what they had gone through. After several months with us, at last, Batman's true spunky and happy go lucky personality has emerged. Pumpkin's health has been restored with the conscientious care she has received. It is obvious that she feels like a pretty dog again with her new collar and frequent baths. Her fur has grown back as her skin has healed but the hair follicles on her face are permanently scarred and so in these areas, she will likely remain bald. Surely the support the two dogs gave each others during the hard weeks of loss and transition helped them to heal as much as the physical care they received at the sanctuary. 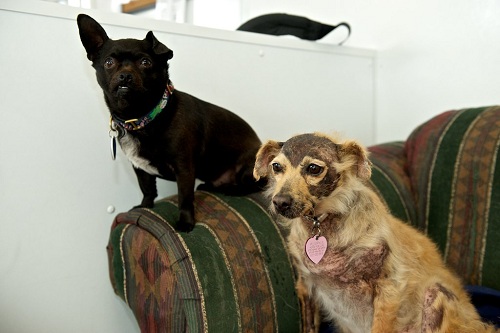 It is hard to think of how alone an animal must feel when they lose their home, even if it's a marginal one. An animal surrendered by their owner or separated from them via circumstances is never more vulnerable, forced to rely on the kindness and mercy of strangers for their survival and any hope for a future. Animals who come into a rescue or shelter from the same household are often separated to make them more "adoptable",where one of the individuals seems like an easier placement. This tactic to obtain a new home for one of the animals at the expense of the other who may be less appealing disregards the friendships between these family members. Now an animal has not only lost their home but their best friend as well, a blow they may never recover from,whether they find a new home or remain behind, unwanted.

Sanctuaries, as true homes to their wards, honor the bonds and friendships among their animals. Certainly having the opportunity to observe our dogs and cats over time has confirmed that animals form strong alliances and close friendships just as we do, mourn when their treasured friends pass away and rejoice when they are reunited with a long lost comrade. Animals have long emotional memories, and never forget their loved ones be they two-legged or four. Dogs and cats kept as pets seem to be valued only insofar as they have a relationship with a person but their friendships with other animals are just as important a part of their well being and quality of life. Yet so many animals are socially isolated from others of their own kind and are very lonely even with attentive owners. Animals of the same species have an unspoken understanding, and those who are friends have an even more profound connection . We feel fortunate that, as a care for life sanctuary, we can provide a rich social life for our dogs and cats and the opportunity to foster the touching bonds between pairs of animals that have found their way to us.


The next photo is of Susie, a shepard mix and Daisy a shih tzu with deformed front legs. Though larger than Daisy, Susie is much more shy. She suffered abuse in her first home and is a humble,timid dog who barks alot and reminds me of the Cowardly Lion in the Wizard of Oz : definitely all bark but because of her large size and demeanor,easily miscategorized as "fear aggressive". The second owners were good to Susie and a few years after adopting her,they obtained Daisy from a pet store. Daisy had physical challenges but is confident and happy because she had always been kindly treated in her three years. She and Susie were true sisters and inseparable. Susie,though older and larger, was accepting of Daisy and delighted to have a comrade,never resenting the new, more confident dog. When their family fell on economic hard times and made the decision to give the dogs up, they contacted Home for Life because they feared Susie, now age 9 years old,would never be adopted as a senior dog, with her demeanor and large size. The Shih Tzu breed rescue was interested in helping to place Daisy,but ultimately the owners opted to keep the two girls and best friends together. Because the past abuse Susie will always be on the retiring side. yet with the support of the cheery,optimistic Daisy, Susie was able to adapt to her new home at Home for Life even at her age. The first week they were with us, one of our staff saw them happily chasing each other and playing in of our meadows during exercise. We knew then that they would be ok despite having lost their home. That Susie and Daisy could face the next phase of their life together made all the difference to their successful transition; I think had Susie lost her home and Daisy too she never would have been able to survive the changes in her life at her age. 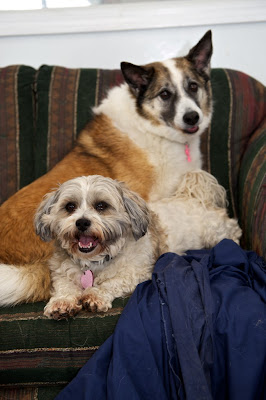 Instead of dying alone, unwanted and afraid, we wish every dog could live to a ripe old age like our Mack and Meyer, who are now age 14. 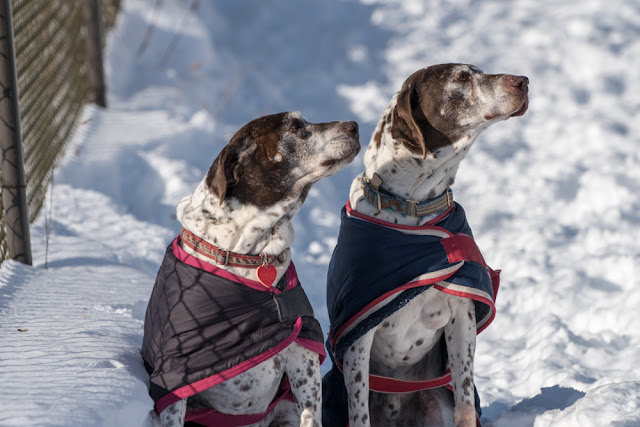 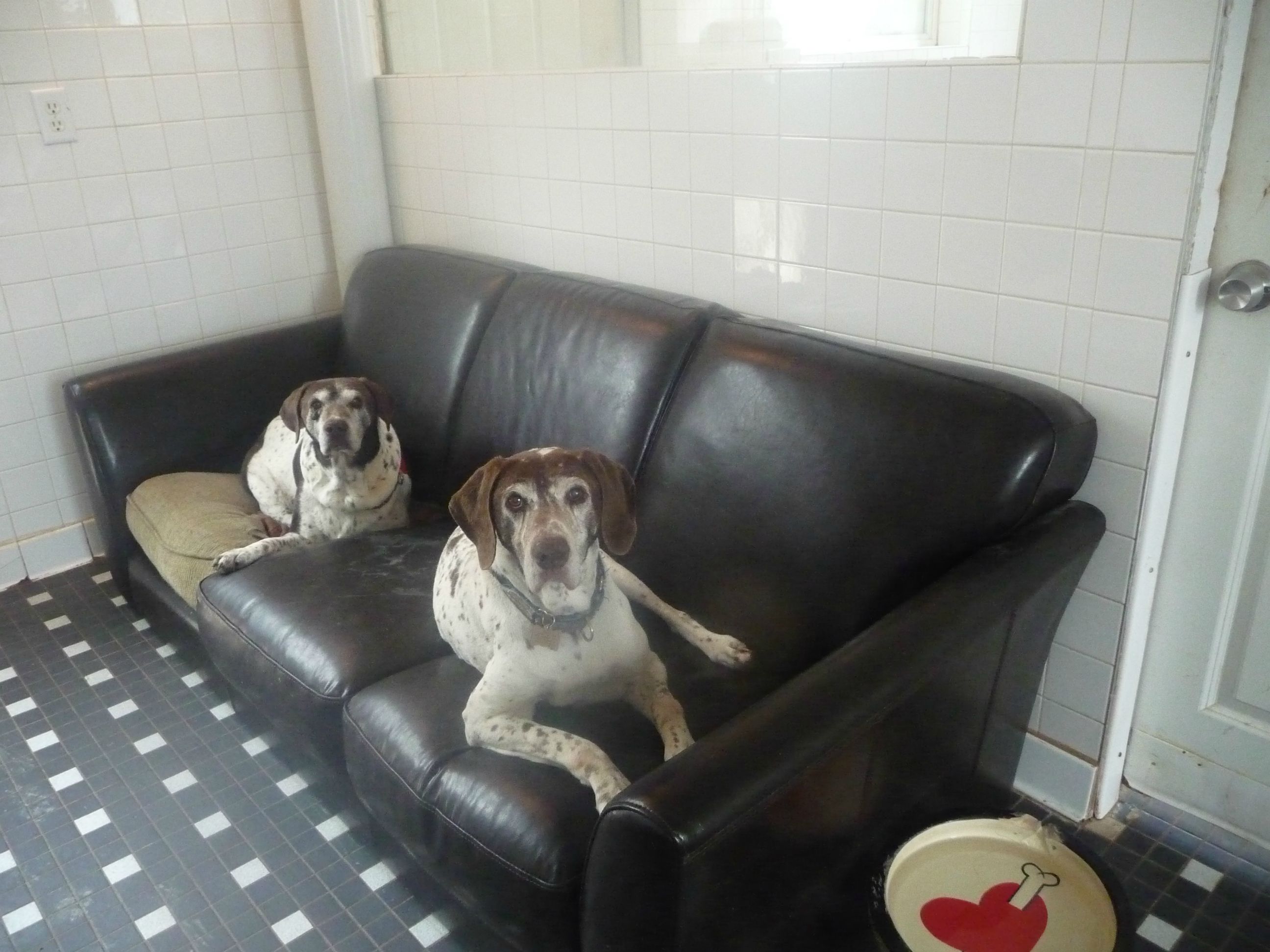 Mack and Meyer are  now 14 years old, and love their couch. They are never far from one another.
Lately Mack has had to sleep in a crate at night because he likes to go out side and tends to fall down. We are worried our overnight staff may not get to him in time, and with it being winter, we want to make sure he is safe and secure. While Mack sleeps in his crate, Meyer chooses a dog cushion right near it, to sleep next to her longtime friend and companion.
Both dogs are on medication for arthritis but continue to thrive and enjoy life at their own pace. At Home for Life, being an old dog is not a crime or ever a reason for euthanasia if an animal is still enjoying quality of life-meal time and treats, the outdoors and companionship of people and other dogs. Mack and Meyer have each other and live in our main dog building with a small group of dogs they are proud to call their friends. Mack and Meyer illustrate our belief that each phase of an animal's life is precious and that a home can be defined in many ways.
ADDENDUM:
We lost Mack this summer due to stomach cancer. Mack lived a long life and was the grand old age of 15 when he passed away. He came to Home for Life when he was 9 so he had many peaceful, happy years at the sanctuary with his best friend Meyer, who survives him. We are happy that Mack  was able to enjoy the beautiful spring and much of the summer before he passed away. Meyer passed away this winter, after eating a final meal of hotdogs and hamburgers.


Eleven year old companions Sheba and Tom were surrendered by their owner when she moved. She thought she had a new home for them but the prospective adopters backed out right before she was to relocate. The owner asked Home for Life to help the two dogs but we felt that were at capacity and asked her to try to find a new home for them. As older large dogs who wanted to stay together, this goal would prove to be elusive. The deadline for their owner to move from her home arrived and in tears, she brought her beloved dogs of eleven years to the humane society because she had not been able to find a single person or a shelter or rescue who wanted them, together or alone. She cried and Tom and Sheba cried. The owner left to start her new life in a new state,while Tom and Sheba were left in the kennels, side by side, in the holding area of the shelter to face thier fate. There, the noise and anxiety of the many surrendered animals who had also lost their homes, left Tom and Sheba shaken and despairing, and they seemed to give up hope. Although large dogs, they were gentle spirits and mild mannered. They trembled and refused to eat. After a week, they had not improved and seemed without the mental and spiritual resiliance to rally. The shelter was concerned that they were going to die from broken hearts. The former owner had left our contact information with the shelter, and we had stayed in touch with the shelter, monitoring the dogs' transition. It was obvious that Tom and Sheba were not going to have success finding new homes,together or alone. Their dire plight persuaded us to find a way to make room for them late in the fall of 2010 so that they could stay together.

Sheba is a beautiful black and tan husky mix with whiskers and eyebrows, and Tom is a dingo mix is a striking chocolate brown with white socks. Upon arriving at Home for Life both dogs immediately sensed that they were in a stable enviornment where they could stay, were cherished and would not be separated. They relaxed and regained their hearty appetites, and have thrived at the sanctuary. Tom loves to be outside and Sheba loves to be inside, but whether indoors or out,they become lonely if they are separated for long. True friends, they are tolerant of each other's preferences , since their greatest joy is in being together.