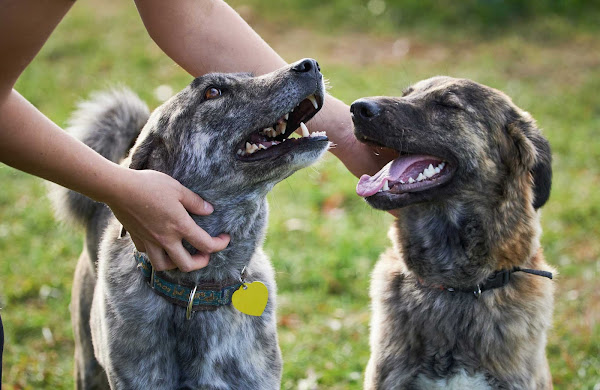 The difficult I’ll do right now. The impossible will take a little while.” -Billie Holiday

We didn’t know how we were going to manage it. And yet, we didn’t know how we could refuse. The Kabul Small Animal Rescue (KSAR) in Afghanistan was desperate for help. This animal welfare organization, directed by American Dr. Charlotte Maxwell-Jones, sheltered many stray dogs and cats, brought to them by U.S. soldiers, contractors, and kind-hearted Afghan children and adults who had rescued the animals from injury, illness, starvation, and even abuse.

In the U.S. we see every dog as a pet needing a home, a potential family member who deserves to be known and cared for as an individual.

In Afghanistan, and many other countries, street dogs are just animals living among people. It is easy to disregard the sufferings of a random, stray dog, especially amid the upheaval that war brings. To care is to feel another’s pain, and people may not risk caring if they feel helpless to fix the situation.

In Afghanistan, KSAR was an oasis for the street dogs and for the people who saw their suffering and let themselves care. Here was a place animals could go to heal and be sheltered. Amid the impersonal, blunt chaos of war, KSAR had taken a stand for kindness, for the willingness to step up and help, to risk caring. They were slowly changing the norm of indifference and helplessness. But now, events on a larger stage threatened everything they had accomplished.

The fall of Kabul to the Taliban was imminent, and with the pull-out of American troops this summer, it was likely that the shelter would be forced to close. The dogs and cats who had been rescued would be released back to the streets or be put down. The staff, many of whom were women, knew they would have to quit work or flee.

While the world’s attention was riveted to the news from Afghanistan last summer, the media reports were not the whole story. Running parallel to these unfolding events, the lifesaving evacuation of the KSAR dogs was under way.

This summer, through a rescue contact here in Minnesota, KSAR reached out to Home for Life® Animal Sanctuary for help saving the lives of their dogs. Their plea was part of an appeal to shelters and rescues across the United States. Of their 50 dogs and puppies they were hoping to move before Kabul fell, KSAR was most concerned for several special needs dogs—some disabled, some very shy, some with harrowing histories of abuse, and some simply overlooked by other organizations focused on adoption. These were dogs they knew would never survive on the streets. When Kabul fell, the shelter would be forced to close, and these dogs had nowhere to go if they could not come to Home for Life.

Home for Life Animal Sanctuary accepted 7 dogs from KSAR—more than any other organization! Who were these dogs we could not turn away?

Seven dogs in all. Seven precious lives who found a Home for Life® at our sanctuary! 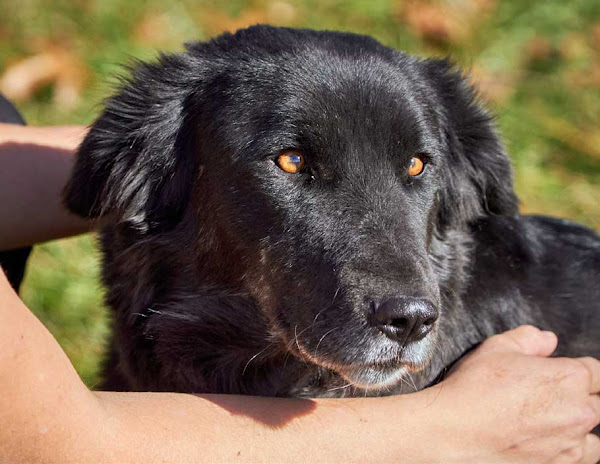 Above Kara: Kara, an Anatolian Shepherd mix, was rescued at Camp Eagle by an American contractor who saw her trying to protect and care for her seven puppies while living on a garbage heap. Kara is very shy and because of her color (black) was overlooked by the other rescues contacted to help the Afghan dogs. She was one of the leftover adult dogs who would have been turned back out on the street once Kabul fell, and a dog that Charlotte and her shelter team believed would not survive on her own. We weren’t PLANNING on helping seven dogs, but could not leave Kara behind. 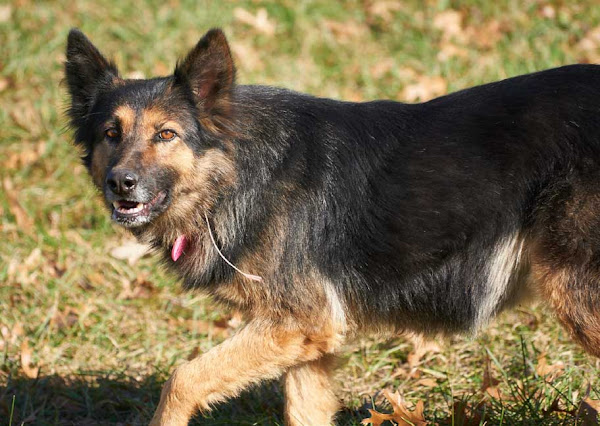 Above ZsaZsa: Beautiful, timid Zsa Zsa came into KSAR from a not ideal home, where she was left tied out to be attacked by other dogs. She was surrendered with a litter of puppies who found homes, but the shelter was protective of Zsa Zsa who had already suffered so much. At her age of 6 years and with her timid personality, they didn’t want to see her bounce from home to home, so asked Home for Life® to give her a safe setting for her senior years where she would not experience the terror and upheaval of her prior life. 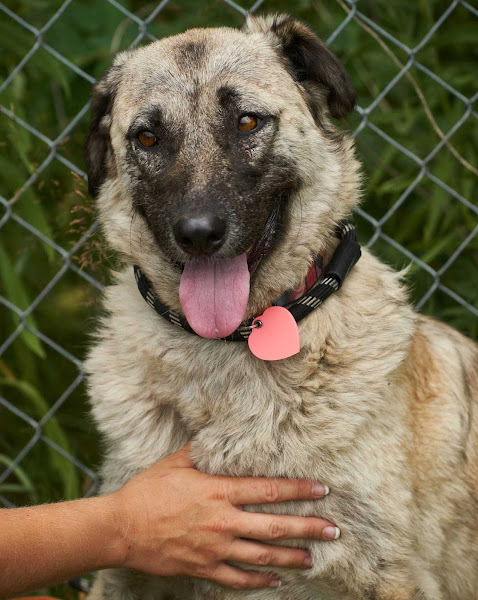 Above Robbie: Robbie is a large, female Anatolian shepherd mix. She was found by KSAR’s staff suffering from mange and malnutrition on the streets of Kabul. After all the work they put into restoring her health, they didn’t want to see her released back to the streets to sink or swim, especially because she is very shy. Robbie was overlooked by other rescues and shelters during the nationwide appeal on behalf of the Afghan dogs to bring them to safety before the fall of Kabul, so Home for Life® offered to help her. 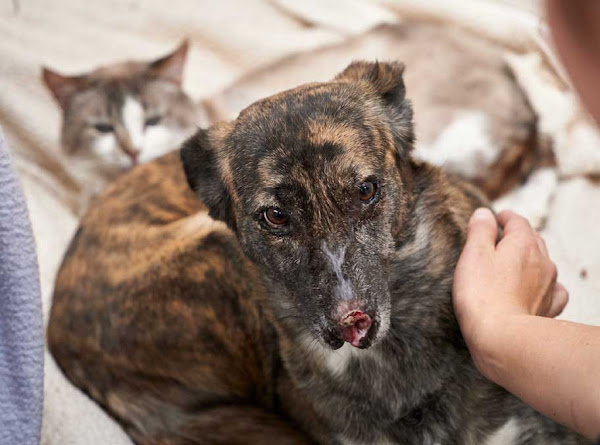 Above Salty: Salty is the personal dog of KSAR founder Charlotte Maxwell-Jones, and her favorite living being in the world! It is a measure of how desperate the situation was before Kabul fell that Charlotte decided to send Salty to the United States, to let her go rather than risk not being able to care for her or to be forced to let her go back to the streets. Salty lost her nose, parts of her lips, and eye lids due to a sand fly infection. She is timid of other dogs, but loves cats! 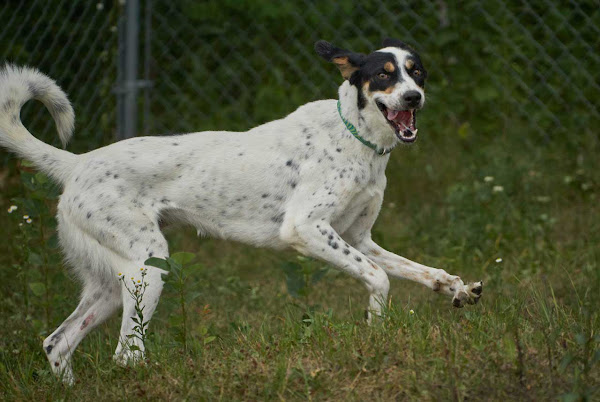 Above Lilly: Our beautiful girl Lilly from the Kabul Small Animal Rescue, was born with Etrodactyly, a severe and rare genetic disorder causing splitting of the bones in the front paw. She was rescued by American GIs at Camp Scorpion. She gets around, but likely will need more significant medical attention than the shelter could give her there. As the Taliban advanced on Kabul, the shelter was facing the real possibility of having to close and put the rescued street dogs at the shelter back on the streets. They knew a dog like Lilly would never survive and were very concerned for her welfare, so they asked us to help her. 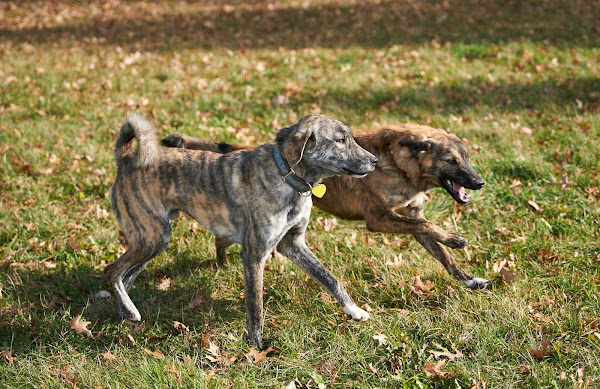 Above Ollie (in the blue collar and yellow tag) and Roxanne (also shown in top photo of this article}: are both from KSAR. Ollie was near catatonic when he first arrived at Home for Life® and survived abuse in his home country including the amputation of part of ear and a long, serious, now healed wound on his side, probably caused by someone using a knife. He was rescued by a sweet Afghan boy who drove off a pack of dogs mauling Ollie. The boy then loaded up Ollie in a taxi and brought him to KSAR’s shelter. Roxanne, one of the director Charlotte’s own dogs, was found being kicked around by Afghan police like a soccer ball. Charlotte drove them off and took Roxanne home with her to nurse back to health.

The Small Work in the Great Work

A shift in outlook leads to a change in behavior, which leads to a change in reality on the ground. These shifts and changes don’t happen under the spotlights, for all that the media strives to hold our attention fixed on the politicians and famous. No, change begins at the margins, with people who are creating the world in their own small spheres, while nobody seems to notice—people you never hear about, yet who share common ground with YOU, a person of caring and compassion.

Through your compassion, you share a connection with quiet, unknown individuals a world away—the Afghan child, the KSAR staff, the U.S. soldier and contractors—who let themselves care about a suffering street dog. Because of you, their efforts and emotional investment will not be hopeless. Because of you, the dogs they got to know and care about as individuals are now safe and happy, with a home for life!

Kindness is a revolutionary act. Once we have seen the world as it could be, as it should be, it is impossible to remain complacent. We can no longer accept abuse, neglect, and indifference.

To shed light on the cruelty these dogs have overcome is one important tool we as animal advocates have to challenge the attitudes which led to the maltreatment. To achieve radical change, though, a revolution of kindness, takes something more: to demonstrate what’s possible by taking a stand for compassion so that those who have risked caring for these vulnerable dogs know their efforts have not been futile.

The rescue of the seven Home for Life® dogs from Afghanistan has rewarded the kindness of the people who first recognized and responded to their plight rather than turning away, hopelessly. When kindness is rewarded, it multiplies. Everyone involved in the redemption of these dogs has seen what the world could be and joined hands to make it so.

Your support has an impact that spreads far beyond the sheltering walls of our sanctuary to start a revolution of kindness in a country a world away. Be part of the kindness revolution that saved these special dogs and took a stand for a better world.

With warm wishes for your holiday and the new year,
Lisa LaVerdiere, Executive Director, and all of us at Home for Life®

Posted by Home for Life Animal Sanctuary on Wednesday, December 15, 2021