A Black Dog Finds a Home for Life 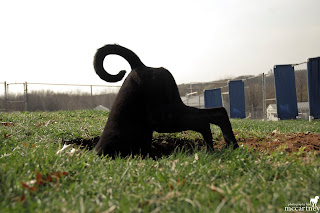 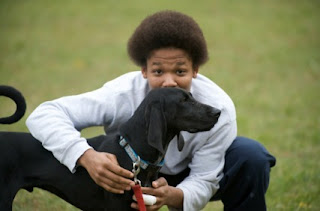 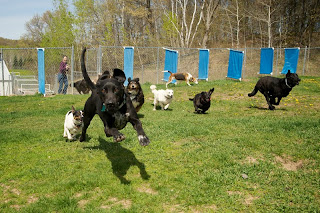 Diego, a hound mix,came to Home for Life from a Wisconsin rescue that uses foster homes.They were persistent about us taking Diego even though we put them off and explored and suggested many other options with them for possible placement of the dog. They had been unable to find an adoptive home for him after over a year of effort, and he was facing euthanasia.
Diego is very young for the typical dog admitted to Home for Life. He had had no takers through the rescue group, where he had been in their foster care for over a year. Though only two years old at the time he was surrendered to Home for Life, Diego had run out of options in the adoption/rescue world, and was actually being advertised by the rescue on Petfinder and Craig's List as "free to good home", an invitation for likely disaster. Diego was brought to Home for Life in the summer of 2009, after the foster home demanded that the rescue remove him. The rescue group had no money to offer Home for Life at the time of Diego's surrender to help support him at our care for life sanctuary,but believing that Diego was a good dog who needed a chance, we agreed to help him.
According to the rescue,Diego had a tough time in his foster home. He was anxious and full of energy. After originally being rescued as an abandonned stray from animal control, Diego had at least one placement in addition to his foster home. He was returned from both placements for the same reason: his high energy and separation anxiety. No one was interested in adopting the black dog of undetermined lineage( hound?lab? whippet?) with demonstrated behavior challenges, even if they could have him for free.
Diego may have seemed undistinguished to potential adopers but we think he is very handsome. As we have noted before, mutts are highly regarded at Home for Life for their distinctive personalities and looks: not one is ever the same. In Diego's case, he has a beautiful and sleek black coat, wonderful soft ears which are nearly as long as that of a basset,a white bib with black polka dots and an original tail that curls and is like a flag. Even in a hole, Diego can be identified by his tail, like no other dog's at HFL or probably anywhere else in the world !

Diego has a remarkable hound bark,and when something captures his attention at the sanctuary he leaps straight in the air while barking, an astonishing feat to witness. Diego is among the most athtletic of our dogs at Home for Life and loves to run and play. He has daily opportunities to do both at Home for Life!
THROUGH THE THIRD DOOR
Diego is happy and content at Home for Life, and as far as he is concerned ( and who else's opinion matters?) the sanctuary is a true and loving home. With us, he is safe, cherished for who he is, has dog friends, couches and soft beds to lay on, abundant outlets for his lively energy,which he can expend without being scolded,great dog food and daily dog treats at Home for Life's evening treat time, and an opportunity to give back. If he wants to bark,run fast or dig,he is allowed to do so without being yelled at or corrected.
Diego was overlooked,as many mixed breed black dogs are, who seem plain or undistinctive,but he has so many wonderful qualities that we hope he will be able to share as a therapy dog in our outreach programs. Besides his good looks and athleticism, Diego is smart and did very well in the Renaissance Program,which he participated in last fall and where he was paired with one of the younger students at Totem Town who, with his fun loving personality and energy, was a perfect match for Diego ( see photo of Diego above with his student trainer from Totem Town). Diego is now looking for the Home for Life volunteer who can work sucessfully with him in providing pet therapy services to at risk people in the community( our volutneers work one on one with a HFL therapy dog to provide therapy services to community in our various programs) . With his sweet and gentle personality, we are just sure that Diego will be a hit as a participant in the Home for Life Pet Peace Corps Programs where our animals give back to the community-as we like to say it's "at risk animals helping at risk people."
Diego's story illustrates how Home for Life's "Third Door" alternative plays a lifesaving role for many animals who are not served by the conventional animal welfare models offered by shelters and rescues.
SPONSOR DIEGO AT HOME FOR LIFE
Diego needs some sponsors who who will hold a special place for him in their hearts. All of our animals receive the same loving and high quality care at Home for Life,whether they are sponsored or not. Sometimes animals who do not have a dramatic story of survival or who are not a breed that attracts people's attention do not garner the support of sponsors as easily as some of our other animals. But these "plain" dogs and cats are just as deserving of support as any of our animals and need those special individuals who can look beyond breed or looks to see the unique qualities within .
The average animal at Home for Life costs us $202/mo to care for . It takes 8 sponsors at $25/mo to full cover the cost of care of an animal at Home for Life. This sum includes food,veterinary care,staff salaries,facilities costs ( heat,light,airconditioning,heat) and grooming. Disabled animals,such as our paraplegics, cost much more. When we taken an animal on at Home for Life ,we guarrantee that the dog or cat will be cared for whether sponsored or not. Sponsorship allows supporters to foster a special bond with an animal that captivates them at the sanctuary, and they have the satisfaction of knowing their support helps all the animals in our care. About 25% of our animals are fully sponsored at Home for Life and 50% of our animals have at least one sponsor. Our sponsors receive regular photos of the animals they sponsor taken by volunteer professional photographers, and can visit their animals at the sanctuary.
We would love for Diego to have a sponsor who would cherish the special qualities we see in him and take a special interest in following his progress at Home for Life.


Posted by Home for Life Animal Sanctuary on Thursday, June 10, 2010