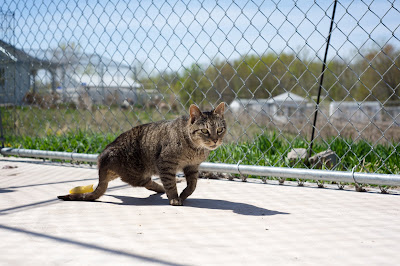 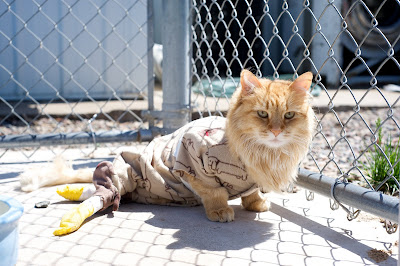 Pictured above is Peaches, who is one of Home for Life's many paraplegic animals. She is enjoying the summer day out in the catrun attached to the cattery. Home for Life has three catteries, and all have attached cat runs.

She got out in the catrun by herself, maneuvering with her strong front legs and upper body to pull herself through the catdoor.

Peaches belonged to a family who let her roam outdoors. Some cruel person, a neighbor, shot her in the back when she was only a year old. Somehow, she was able to drag herself back to her family and her home.They did bring her to the vet,but the bullet had caused such damage to the spine that she was not able to regain mobility, and she was also now incontinent. Peaches needed to have her bladder expressed and help keeping clean. The family loved their cat and did a good job taking care of her as long as they could.
However, like so many others, Peaches' family was experiencing financial problems and was unable to stay in their home. With their relocation, they were unable to bring Peaches with them.They pleaded with Home for Life to take her.They told us that if we did not they did not know what they could do and sadly, would have no choice but to put her to sleep.

I just hate it when Home for Life is put in the position of having to take the animal to spare him/her from the owner's putting it down. We receive this ultimatum too often from owners,shelters and rescues who threaten us with this "ultimate solution" - I suppose out of desperation and thinking that if they threaten us with the death of the animal we will feel guilty and/or responsible enough to try to find room for just one more. This occurs with all types of animals in need, not just paraplegics. I especially hate it when organizations who call themselves "rescues" threaten to euthanize their animals if we won't take them. Emotional blackmail. We have been sworn at, called insulting names, told that if we won't help the animal in question the death of the animal will be our fault,ect. When a "rescuer" resorts to talking to me this way, that will be the last time we deal with them. Almost worse is the cold voice stating the alternative if we cannot take the animal- as if they are indifferent about having to put the animal down if we cannot take it. Depressing.

But we digress. In the case of Peaches, as with almost any paraplegic,there are very few options for them,with rescues,shelters or even most sanctuaries. Paraplegics take alot of work and creativity to care for to ensure them a quality life. It takes patience, work, and imagination to picture the potential of the animal instead of focusing on the limiations. Dogs will usually be helped before cats but not always. The incontinence as much of the lack of mobility cause the hesitation to help them. Also the prevailing idea is that if an animal cannot ambulate they must have no quality of life. That position is pretty ignorant. Most animals want to live if they can and will make the best of their situation, focusing on what they CAN do not their lack. If they can enjoy the sun,tasty food, treats and attention,the company of their dog or cat friends, the animal still has quality of life that should be preserved and cherished.

So,three years ago, when Peaches was offered to HFL, we knew she had few if no options and it was either accept her at HFL or let her be killed. So of course we took her!

Peaches is a large female, and from what I understand an unusual color for a female cat- most orange cats are males. At the time she was surrendered, she had long thick fur, and while the owners had done their best, she was difficult to keep clean. At HFL Peaches is kept in a lioncut with her head long and the lion plume on her tail but with her body shaved close.This haircut is more than aesthetic though she does look very pretty with this style- the close cropped fur allows us to ensure that she can be easily and quickly cleaned up if she has an accident.The skin will quickly breakdown from urine scald if permitted to remain on the skin-urine is very acidic and harsh on the skin. All our paraplegic animals receive twice daily bathing to help them keep hygenic. In the case of Peaches, the water therapy helped heal the pressure sores she arrived with and now keeps her skin clean. After she is bathed, she is dried in the cage dyer where she socializes with other paraplegic cats including Rory,another of our cats who was shot in the back and lost the use of her back legs. Paraplegic animals who have been injured often cannot totally void their bladders without help so the staff assigned to their care each shift expresses the bladder at each bath time. Urine left in the bladder will cause infections to which these special need animals are prone. We use prodcuts that protect the skin from abrasions like Alu-Spray( a product used for horses that rub their faces on fences), and sprays to help heal and prevent infections.
The paraplegic cats do not use carts as most of our dogs do. We have found that the cats resent the restriction the cart imposes on them. They are much happier being free to move under their own power.

With the paraplegic animals,we study how they move and where the pressure points are. We strive to afford our paraplegic animals the most freedom that we can. They would be easier to care for if caged all the time but our cats think they are like any other and refuse to admit there is anything they cannot do.They use the litter box, go outside and climb the cat trees. Through observing their movement it becomes clear where they will need extra protection to prevent the development of pressure wounds. This is where creativity and imagination come in. With Peaches, she is a heavier cat and to move pulls herself along on her hip and upper leg- very difficult areas to keep bandaged. Dogs and cats have no shoulders so it is difficult to keep any kind of bandage on by anchoring it to their upper body. After some consideration and experimentation, the staff came up with the idea of a baby Onesie for Peaches. The outfit covers the area that is prone to abrasions as she moves along.To keep it on,we tape it around her waist. Initially Peaches was indignant at being dressed like a doll but now has come to accept the process of getting dressed each morning and evening and appreciates the freedom she enjoys once the routine is completed. I have fun shopping at Target and Walmart in the baby department for her outfits.

She is free of any sores and can move along in the cattery and in the cat run as she likes. Her feet are also bandaged like a race horse to prevent the sores that can develop as she moves along.
We first apply the ointments or Alushield after her water therapy,then gauze pads and gauze wrap,tape and then colorful Vet Wrap. There is a real art to bandaging the legs of our dogs and cats: the trick is to get the wrap snug enough so it will stay on during the animals' active days without cutting off the circulation in their legs.

Rory,the tiger cat in the first photo above,who is much lighter,lifts herself up on her front legs as she moves along at lightning speed. With Rory, only her one back leg tends to drag as she moves and so that is the only leg that is wrapped and only the lower part that tends to chafe. I have heard of animals and people who experience phantom feelings or even pain in missing limbs and sometimes it seems like

that happens with Rory;she appears to be trying to scratch her back with her hind legs and you can see her mind telling her hind legs to scratch, and her legs trembling as she tries to do so but cannot due to the damage from the shooting.
Both Peaches and Rory are adventerous. It was probably their intrepid spirits which got them into trouble. Rory was found in the city of Minneapolis by the police after someone had shot her.She had been exploring in an alley and like Peaches was barely a year old when injured.However this boldness probably accounts for determination of both girls to make the most of their lives-they used up at least half the nine they were allotted when the survived their injuries. Both cats love nothing better than to come out and sit in the grass while I weed the flower gardens. They love to semi-hide in the tall grass and watch as I work, catch bugs and focus on the birds that visit the nearby feeders and birdbaths. Through the efforts of our staff these two cats can still enjoy their lives to the fullest despite their disabilities.
Posted by Home for Life Animal Sanctuary on Sunday, June 27, 2010