Home For Life's International Rescues: How a Small Sanctuary Makes a Big Difference

This summer has marked a new phase for Home For Life, and the recognition and awareness created by the sanctuary’s mission and work. Home For Life’s focus is on specialized, high-quality care for at risk animals—many of them disabled. These are animals that often are the first to be abandoned at shelters and rescues and the last to have any chance of finding a new home. With few organizations willing or able to take on the challenge of animals with special needs, word of the unique services provided by Home For Life has spread, bringing the sanctuary to the attention of shelters and rescues from around the U.S and now even internationally. 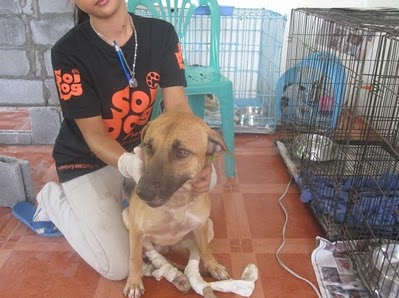 This is haan, from Thailand. (In
Thailand, capitals are not used so their names are not capitalized.) haan means “brave” in Thai. He is also called “chok dee” by the policeman who rescued him, which means “lucky”. And below is indi the puppy. Both haan and indi are paraplegic, and were born street dogs. haan was found dragging himself along the street, covered with wounds, most likely having been hit by a car. Both dogs arrive next week from Phuket, Thailand to begin their new life at Home For Life! 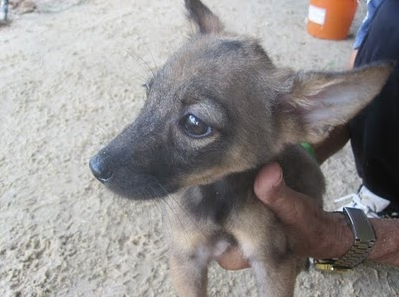 indi is still a puppy. A cruel kick left her a paraplegic as well. indi was rescued by a boy monk who witnessed the assault and intervened. The boy monk made sure indi got safely to the Soidog.org Rescue in Phuket before he left to go back to India to continue his studies. Thailand is a buddhist country so neither dog was at risk for being euthanized but their prospects for getting the care they needed to reach their potential and enjoy a comfortable and health life were minimal. Both dogs are currently being cared for by the Soidog.org rescue, a wonderful no kill shelter in Phuket which cares for over 300 former street dogs.

Many find homes in other countries but the prospects for these two paraplegics to ever leave the shelter were very slim. More photos of haan and indi and their stories can be found on the soidog.org website excerpt here: "The Story of Haan and Indi...Soon Off to America..." in late September. Thank you to Diane Thurbon, an Autralian national who works in Phuket and is a Soidog.org volunteer; Diane has helped raise the money to help pay for the dogs to travel to the United States.

This summer Home For Life accepted two wonderful dogs from Mexico. Leah, a striking and sweet small brindle mixed-breed was a street dog rescued by well-known Minneapolis attorney Jim Schwebel and his wife Mary who help many Mexican street dogs find new lives and homes in the US. In the case of Leah, she was either born with a spinal deformity or suffered some trauma which resulted in incontinence and a hopping-like gate. She has become fast friends with two young dogs, also disabled: Luke Skywalker a young boxer puppy from Washington state who is a paraplegic; and Leo, an Australian Shepard mix from Colorado. Leo was found on a reservation being beaten by a group of boys with rakes. He had suffered a broken back either from the beating or a previous trauma such as being hit by a car. Leo has regained some mobility through water therapy, although his gait will never be normal.

Nino, also from Mexico, was previously profiled in one of our blog entries. Nino was born to a street dog who lived in a village

outside of Cancun. The mother dog gave birth to a litter of five puppies and kept them hidden in one of the jungles near the village. These jungles are like the protected national and state forests here in the U.S. Three weeks after Nino and his litter mates were born, a gang of boys wielding machetes found the puppies and slaughtered the entire litter, with the exception of Nino, who was saved only because his mother grabbed him in her mouth and ran.

A kind man and his wife from the village saved Nino and brought him to a rescue in Cancun, Rescate Malix (“rescued strays” in Spanish), who then asked us to take him in. Nino came to the sanctuary in May of this year, accompanied by Angie, the founder of Rescate Malix. Nino was too young to remember the trauma of being mutilated and is a cheerful and happy puppy. He is very agile and like a circus dog, can walk on just two legs, with his weight balanced on his front paws. Now about six months old, Nino is being fitted for prostheses, after a series of x-rays taken of his legs, and we hope he will be able to use them successfully to walk again.

The company custom making the prostheses is concerned that the amputations were too high up on Nino’s tibias to allow for their use but has agreed to reevaluate the x-rays to determine if there is anyway he can be fitted for them. A video of the spunky and always smiling Nino can be seen at Home for Life's own YouTube Channel. Here is Nino's Video:

at our sanctuary. A small alastatian (German Shepard) female, Kitchee was born in Saudi Arabia with deformed hips and hind legs. Abandoned by her owners and thrown out into the street , Kitchee was stoned nearly to death by a group of boys before a good Samaritan came upon the scene and rescued the puppy in the nick of time. The man rushed the nearly dead Kitchee to a veterinarian in Saudi who saved her life but had no place to care for her long-term.
During her recuperation, Kitchee stayed in a small back room at the vet clinic that was dark and had only a cement floor for her to lie on. The back room of the clinic is where a rescue from Dubai found Kitchee and agreed to help, hoping that her chances for a new home might be more promising in that country. Kitchee was moved to a boarding kennel in Dubai where she has been well treated. The rescuers sent us a short video of Kitchee at the kennel in Dubai.

Rescuers, utilizing word of mouth and social media, were not able to find an adoptive home for Kitchee after several months of hard work. The networking by her rescue group led them to Home For Life. In July, a representative from the group came to Home For Life to visit the sanctuary and determine if we would be a quality alternative for Kitchee. In September, the Dubai rescuers will personally accompany Kitchee to the United States and then to Home For Life to see her settled in her new home. Kitchee will be evaluated by veterinarians here because it is believed that reconstructive surgery may relieve some of Kitchee’s pain and help her walk with more ease. 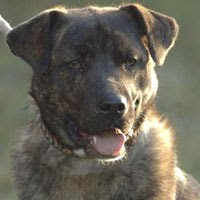 Kitchee’s video discloses that she may have a deformity like one of Home For Life's dogs, Tiger (at left), who was greatly helped by reconstructive surgery on his legs. Click here for Tiger's story.

Thank you for reading our blog and keep in touch.
Posted by Home for Life Animal Sanctuary on Tuesday, September 14, 2010