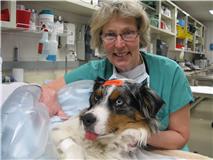 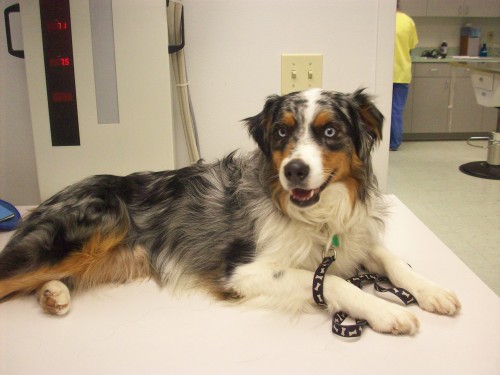 When love and skill work together,expect a masterpiece.- John Ruskin

As one of the Country's only care for life sanctuaries, Home for Life is often called upon to help desperate animals whose needs are beyond the scope or capacity of other shelters focused on adoption. Often other shelters will turn away animals with extraordinary medical needs, applying a triage philosophy to helping the most animals with limited resources. Occasionally a shelter will take in an animal with special medical needs, and then later recognize that the dog or cat will require on going, complex care that an adoption focused organization cannot provide. In such situations, Home for Life offers another chance- the "door number three" -for animals who are passed by for adoption but who can still live a quality life.

Last month, we spent alot of time at the University Veterinary Medical Center with many animals who needed specialized medical care. In animal rescue and particularily working with a sanctuary, where we try to help the truly lost cause cases, we see the worst in people and also the best,most kind and generous people. The pet owners who bring their dogs and cats to the University for care represent the most loving and dedicated of animal caretakers who will go to extraordinary lengths and expense to help their pets whom they love so dearly. It's not just that these people spend the dollars on their pet- you can tell that not all of them are wealthy-but you can see how extremely devoted they are to their dogs and cats-these pets are everything to them. Some of the dogs, are expensive and exotic pedigree purebreds but many, and certainly most of the cats, are not. Observing these pet owners with their hearts on their sleeves made me wonder at the devotion and sacrifice of these individuals on behalf of their pets,while many anonymous dogs and cats who are unwanted, unseen in shelters or rescues or abandoned will never have this effort made on their behalf. The only variable which seems to me to determine how resources will be directed on behalf of an animal in need seems to be the degree to which an animal is cherished as unique and as an individual . The owners I observed at the U have invested themselves in their pets and they are part of their lives and their hearts.
"To me you're still nothing more tha a little boy who is just like a 100,000 other boys. And I have no need of you.And you, on your part, have no need of me. To you, I am nothing more than a fox, like a 100,000 other foxes. But if you tame me,then we shall need each other. To me, you will be unique in all the world and to you,I shall be unique in all the world.

-The Little Prince
Home for Life had a number of desperate animals who needed our help in January which is why were were at the University Hospital so often. Frankie, pictured above, is one of the several we helped this January. Named for his blue eyes, and also becasue he was found near the birthday of Frank Sinatra, Frankie was found along a rural highway in Ohio. A concerned citizen saw him lying in the ditch unable to move. Three days later, the same good samaritan saw the dog again, still lying there, in 20 degree winter weather and decided to do something about the situation. He called the highway patrol who in turn call animal control. The animal control officers, along with the highway patrol, recovered Frankie, who was unable to walk and in great pain. Evaluating his condition, the animal control and highway patrol officers estimated that the poor dog had been there as long as a week,somehow clinging to life without food or water and exposed to the winter elements. When recovered, he weighed just 30 lbs. He was neutered,but had no microchip.
Frank landed at the animal control shelter,where a kind volunteer learned of his situation. After checking the internet and newspapers, she determined that noone had lost or was looking for a neutered male australian shepard. The shelter gasses unwanted or unclaimed strays that volunteers cannot move to rescue and Frankie,who could not walk and was incontinent,was scheduled to be gassed when the required hold for stray animals expired. Late on a Wednesday night in mid January, we received an urgent email from Paula and another volunteer she works with, a desperate email: if we could help Frankie, who was paraplegic and would need his bladder expressed, we had to let them know by 8 am Thursday morning or he would be put down. The volunteers said they would bring him to a veterniarian to be euthanized by lethal injection so he would not have to be killed in a gas chamber at animal control. At this point the dog had had no additional medical care and had sat for more than a week, at least,with the terrible injuries. With less than 12 hours to gather any further information on the dog, his temperment, or his medical status, we had to call it. Other rescues or shelters contacted by the volunteers had either not responded to pleas for help on Frank's behalf or had turned him down. Home for Life decided to try to help Frank and told the volunteers to send him north to us. After travelling via PilotsnPaws, Frank at last made it to Home for Life on the Sunday afternoon of that same week.

Once they knew that Frank would be coming to HFL, the Ohio volunteers sought some preliminary veterinary evaluations on his behalf,where it was learned that his right femur was fractured. The extent of any other injuries was unknown at the point he departed for Minnesota and Home for Life. But all who met Frankie were impressed by his will to live and also his stoicism: despite his injuries he was very gentle and never tried to bite.
First thing Monday morning, Frank was off to our local vet who discovered that, in addition to the badly fractured femur, Frank had a dislocated left hip that was completely out of the socket.Because of the time that had elapsed since the injuries occurred, surgical intervention was necessary to correct the injuries. Frankie was put on pain control and kept quiet and off his feet.By Thursday,just a week after we had accepted him at HFL,Frankie was in surgery at the University of Minnesota Veterinary Medical Center where renowned orthopedic surgeon Dr. Betty Kramek( pictured above with Frankie after his surgery), repaired both the right femur and dislocated hip. At this point, poor Frank had gone nearly two weeks with the terrible injuries, and the two ends of his right femur were completely out of alignment,with the muscles severely contracted. The hip socket of the left leg was filled with scar tissue and blood clots and again the muscles badly contracted. Dr Kramek elected to repair both injuries at once so he would be able to walk rather than risking further injury to either side. Frank's surgeries were done at the same time and both procedures were very successful,thankfully. He spent three days at the University recovering from surgery,and came back to Home for Life on Saturday afternoon.

Not much is known about Frankie's background but the U estimated his age to be about 4 years judging from his teeth. Another interesting observation made by his veterinary nurses was that Frank is deaf. His lack of hearing may explain how he came to be hit by a car; he would not have been able to be aware of the oncoming cars from the sound of the motors or tires,especially at night. Frankie intently watches everything around him,and relies on his sight to follow directions and anticipate what is going to happen. But at night, if he was abandoned, or lost and alone, he may not have been able to save himself from being hit by a car if he could not hear.
Since it was the beginning of the new year, we had money from the holiday donations we had received from many generous cotributors who had directed their gifts to the Emergency Medical Care Fund. Thankfully, we had the funds available to help Frankie, and pay his veterinarybill at the University and at New Richmond Vet clinic: the total: over $4000. Frank is able to go to the bathroom on his own, and Dr. Kramek feels that he will be able to walk again after he recovers from surgery. His rehabilitation period is estimated to be about six weeks. He will get his staples out tomorrow, and Dr Kramek will evaluate his progress as Frankie was tending to walk with his right hind paw knuckled under due to the trauma of the accident and length of time he went without treatment. Our staff is applying hotpacks to his hip and thigh and working with Frank doing physical therapy exercises to help his leg muscles regain extension and flexibility. Frankie is now best friends and roommates with another "January" rescue and member of the "Class of 2011 who benefitted from the Emergency Medical Care Fund: that is the tiny doberman Juliet who was confiscated by the police in a neglect case and came to HFL with several medical problems.( see Home for Life's twitter feed @hflanimals for photos and information on Juliet).
Frankie's case raises an important question about animal rescue and the philosophy of our sanctuary with regard to the animals we help. Why direct so many resources to helping one single animal? That amount of money it took to repair Frank's injuries and allow him to live a pain free life and to walk again, we hope, could have been used to help several animals. Where resources are limited trying to do the most good for as many as possible is a legitimate approach to rescuing animals.
Home for Life has always believed that helping animals in need and saving lives requires a multifacted approach. A focus on moving numbers of animals thru adoption addresses one aspect of the need. An exclusive focus on the numbers,however, will exempt many deserving animals from help. Sanctuaries like Home for Life have a vital role to play if as many animals as possible are to be saved because a true sanctuary is created to focus on the individual animal and their unique needs. The current focus in animal welfare is on moving animals through the system to adoption and posting high adoption numbers. Dogs such as Frank who fall outside the parameters of the 'adoptable' animal and who require a rescue to divert disproportionate resources to help them will not be served by the conventional current models offered by animal welfare. Frank was hours from losing his life when Home for Life stepped forward to help him. Sanctuaries whose focus is on the individual animal provide a depth of care and a lifesaving,life affirming alternative for these special animals.

It is the time you have wasted on your rose that makes your rose so important.

Home for Life established its Emergency Medical Care Fund in 1998, shortly after our founding.
Posted by Home for Life Animal Sanctuary on Sunday, February 13, 2011