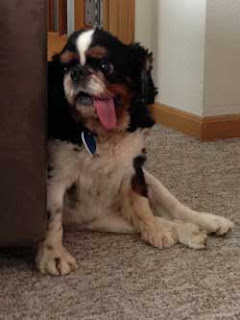 It is not always obvious that animal sanctuaries can help people as often as the animals we care for and shelter. As a care for life sanctuary, our animals are home for life, and this consistency and stability also provides peace of mind and reassurance to former owners who know where their beloved family members are. Many times, these individuals have been forced by circumstance to surrender their dogs and cats- situations like money issues, failing health, death of a spouse, a move to a safer setting where the pet may not be able to join them- all are circumstances that may result in a pet owner having to surrender a beloved pet. In such situations, sanctuaries can play a unique and vital role in helping to preserve the animal-human bond, even when a dog or cat can no longer stay in their home.
Since 1997, when Home for Life was founded, we have cared for retired police K9s, retired seeing eye dogs, and the much loved pets of people struggling with serious health challenges, or compelled moves to assisted living facilities or nursing homes. In all these situations, Home for Life has been able to provide the bridge, an ongoing link that has preserved the connection and relationship between these beloved working animals and pets and their guardians who have the opportunity to visit regularly and therefore preserve this precious bond. Care for life sanctuaries are in a unique position- like none other in animal welfare- to maintain the bonds between animals and their owners. Sanctuary saves lives, not only of the animals we help, but also for the people who love them, #sanctuarysaveslives.
Read the story below of Tupper, a 13 year old Cavalier King Charles Spaniel who found a new home at our sanctuary, allowing him to maintain his treasured relationship with his longtime owner, Rich, age 91. Also featured is the story of Cedric, a smooth coat Collie, who came to Home for Life after his owner was diagnosed with cancer. Not only were his owners able to visit Cedric at Home for Life but they had much joy in Cedric's renaissance as a therapy dog visiting children struggling with serious and chronic illnesses and receiving treatment at Masonic Children's Hospital, at the University of Minnesota, Minneapolis.
There's a new face at Home for Life, and what a face!
Tupper is a Cavalier King Charles Spaniel who came to Home For Life at 12 years of age. He joined our sanctuary community last July, when his 91 year old owner, Rich, had to enter assisted living. The separation was tough for both Rich and Tupper. Tupper had been a beloved companion to both Rich and his wife from early puppyhood, and he had become Rich's best friend—The two guys kept each other company during the difficult time after Rich’s wife passed away; they took comfort in the daily routine of walks, meals, and quiet hours together, reading and watching TV. Tupper was very attached to Rich. As aa shy dog, unaccustomed to meeting new people at his home, much less going to new places, he would run and hide whenever Rich's adult children came to visit their dad. He had lived a somewhat isolated canine life, first as an only dog, with Rich and his wife, then as a sole companion to Rich. Over the years, Tupper developed into an eccentric, but endearing curmudgeon, set in his familiar ways.
Life shifts for Rich.... and Tupper.
When Rich reached 90 years of age, his family made the difficult decision to move him to assisted living where he could have steady care and attention. Though necessary, the transition was painful and difficult for Rich. All the more so because of the uncertainty about Tupper’s future. Rich's family tried their best, but they were unable to find a place for Rich that would accept dogs-. They were forced to separate Rich from his dog, but they hoped at least they could save Tupper's life. Again, despite every effort, Rich's family struck out—no shelter or foster organizations were willing to take Tupper. The reason? At age 12, his prospects for ever finding a new home were slim. The many shelters and rescues Rich’s family contacted said they didn’t think they could find anyone interested in adopting Tupper. The sad reality was that Tupper was not very desirable, and these organizations were hesitant to open their doors to him..
Our society views companion animals almost like standard consumer goods. Different styles of dogs go in and out of fashion, and the market responds. Shelters and rescues were created to find new homes for animals, and they are unavoidably pressed into market considerations when they screen an animal. It’s no surprise that they are more willing to make room for an animal they can quickly re-home than for one who might be trickier to adopt. But where does that leave dogs and cats like Tupper, who may be old, shy, and set in their ways? If the prospects are dim for adopting them out, then rescues and shelters will never be a lifesaving option for them.
After 12 years as the beloved pet of a single owner, Tupper was facing a cold world, with nowhere to turn.....
Rich was facing the heartbreak of leaving house, and also losing the one constant link he had left to that home.
Everything Old is New Again..... 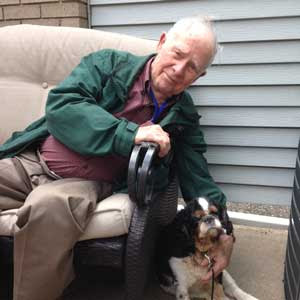 With the date fast approaching when Rich would move to assisted living, his family learned about Home for Life. Rich’s daughter contacted us in the Spring of 2015. At first, we referred her back to rescue and shelters, assuming that, as a purebred Cavalier, Tupper might be adoptable. But the family had struck already been turned away by these and other organizations. Rich and Tupper had nowhere else to turn.
Tupper's story illustrates that saving the lives of millions of homeless animals requires a multi-faceted approach. Long term strategies such as spaying and neutering will reduce the numbers of animals needing homes. Aggressive adoption efforts showcasing and publicizing pets (even ones that in the past might have been challenging to place) will find homes for those animals who can adjust to a new home.
Despite these strategies, there will always be animals- like Tupper- whose age and temperament make them poor candidates for adoption. There will be dogs and cats whose spirits have been broken after several adoptions and rejections…until they are unable to bond with a new human family. How can those of us working to improve animal welfare ever hope to end the horrors and waste of euthanasia without a safe landing place for dogs and cats like Tupper? Market forces measure an animal’s value for the sake of adoption, but we must measure the value of the animal’s life for its own sake.
Home for Life was created to serve as a permanent home to animals like Tupper. Most organizations work with animals who can succeed in the homes of people adopting them. Adopters decide whether those relationships are successful or not. Home For Life operates outside the adoption market. We provide another chance—the "door number three"—for animals who are passed by for adoption but who can still live a quality life. Our only measure of success is the animal’s health and happiness.
This "Third Door®" long-term animal sanctuary is an innovative and compassionate option where animals benefit from the company of a canine or feline family, and of our devoted full time staff. They enjoy fresh air, exercise, group play time, and regular grooming. They receive first rate medical attention in a stable, loving, and safe environment.
Tupper's family wanted to have him come to Home for Life is so Rich would be able to visit him once he has settled into the assisted living facility. His children pledged to bring him out for frequent visits to spend time with his beloved dog which would ease the transition and lift everyone's spirits. Both Tupper and Rich could look to the future with hope and confidence because their bond would be honored and protected by Rich's family and by Home for Life.
Home is Where the Heart Is
In the early summer of 2015, Rich moved into his new home at the assisted living facility in Andover, MN a suburb of Minneapolis, and Tupper came to Home For Life. Since coming to the sanctuary, Tupper has been diagnosed with the beginning stages of Cushings Disease and dry eye but otherwise is doing great for a dog of nearly 13 years! Although it was a very sad parting for the two friends, everyone was cheered by the fact that Rich and Tupper can still visit one another, and that Rich and his family know where Tupper is and can to follow his transition and progress in his new home at the sanctuary. 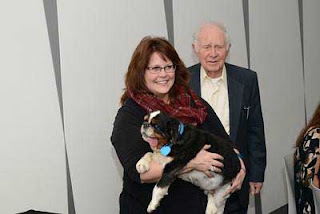 It has turned out to be easier on everyone for Tupper to visit Rich at his new place at the assisted living facility, saving his kids and him such a long trek to Star Prairie WI, where Home For Life Animal Sanctuary is located. Thanks to HFL volunteer Cheryl, we have managed to get Tupper over to visit Rich about every 3-4 weeks. The connection that Rich and Tupper share has maintained. It was that bond that represented home for Rich, and it has meant all the difference that Tupper is still a part of his life. Tupper will always be a part of his life and his heart.
Aged to perfection
Having Rich, his best friend and longtime owner still a part of his life, has given Tupper the stability and confidence to embrace the transition to Home for Life.
Home for Life has given Tupper a new home with new experiences: for the first time in his life he has dog friends, and even some friends who are cats! Tupper previously lived alone as an only dog, and although he loved Rich, Tupper was often lonely. His new friends keep him young and active, and keep his mind stimulated. At our 2015 Fall Gala, Tupper took part in Home Life's annual dog parade…with Rich! Car rides and grooming sessions are also part of his regular routine, as well as going outside for walks—Tupper loves to play outside in all seasons.
Tupper's story illustrates that sanctuaries have an important role to play in preserving the human-animal bond, even when difficult circumstances make it impossible for a pet to stay in their adoptive home. Tupper's regular visits with Rich have helped them both transition to a new phase of their lives with honor and grace.
The heartwarming story of Tupper and Rich epitomizes the power of animal sanctuaries and what they can do to help people and pets!
P.S. Watch this short video about another senior Home for Life dog whose move to our sanctuary helped him preserve his relationship with his family. Cedric, a Smooth Coat Collie, lost his home after his owner developed cancer and had to move. Luckily, his move to Home For Life meant that he would not lose contact with his family. They visit him regularly, and are happy to see the direction Cedric’s life has taken. The good-natured collie took on a new role at Home For Life as a therapy dog, visiting hospitalized kids at Masonic Children's Hospital: 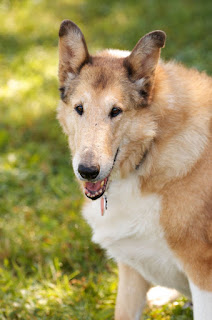 Posted by Home for Life Animal Sanctuary on Saturday, May 28, 2016