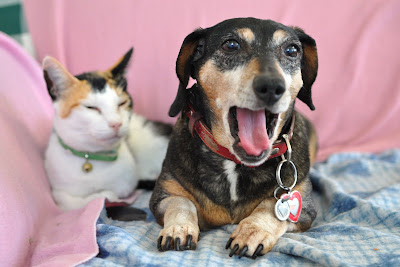 I love these photos of some unlikely best friends from Home for Life because they reveal what makes our sanctuary so special. At most rescues or shelters. small dogs and big dogs are segregated from each other and often kept in individual kennels and cats and dogs are almost always kept apart. Animals at shelters are in transition and have little opportunity to form bonds of friendship even with animals of their own species and size. Particularily heartwrenching are the animal friends who enter a shelter, surrendered from the same home, only to be split up to improve their chances for adoption. It is bad enough that pets lose their home but to also lose their cherished animal friend can be a blow some dogs and cats never recover from.

Home for Life's care for life philosophy means that we have the luxury to get to know our animals as individuals, and our animals have the time to reveal themselves free of preconceptions. Although animal species and breeds within the species have typical characteristics,each animal is also an individual. A small dog can have such a formidible personality that a big dog turns out to be the perfect friend and a dog feisty with strangers or other dogs is soothed by the calm presence and camaraderie of a cat and seeks them out. A sanctuary, the third door in animal welfare, is a true home to the animals, and a feature offered by sanctuary that is unique even to a typical adoptive home is the friendship a sanctuary animal can enjoy with other dogs and cats. Many pets in the typical home are quite isolated from others of their kind. Although dogs and cats dearly love their human caretakers, the companionship of animals of their own kind provides an understanding that only another cat or dog can offer. 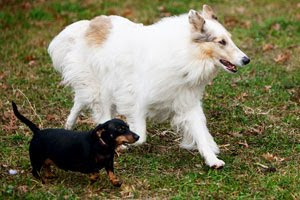 Because we knew that Trudy was a gentle spirit, though a large herding breed dog, we hoped that Snoopy, a misunderstood smoth coat dachshund with "attitude" would be safe and probably thrive in the group of dogs headed by Trudy. http://www.homeforlife.org/whats_new_032810.htm 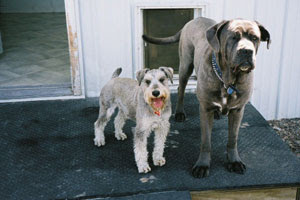 Similarily, neapolitan mastiff Sapphire was strong,large and could seem quite aggressive but

Fritz the schnauzer,a survivor of terrible abuse at the hands of a drug-addicted,sadistic owner, saw through her " cowardly lion" demeanor. http://www.homeforlife.org/dogbio_fritz.htm

Sapphire,who had only one eye,was nearly blind, and was actually quite bashful and insecure,having been rejected by her mother at the age of two weeks. She was raised at Home for Life from the time she was three weeks old and bottle fed by our staff. As she grew up at the sanctuary, without the chance to play with her siblings or puppies her own age( Home for Life has few puppies as a care for life sanctuary), Sapphire had only older dogs to socialize with. Even though the older Home for Life dogs we introduced her to were kind, they were not really interested in playing like a puppy would, and she was naturally timid and deferential to them due to her youth. As she got older and stronger, we worried that she might become fearful and aggressive,with the potential to be a risk with her size. Fortunately when Fritz came to Home for Life, at just about 9 months of age, he was still young enough to enjoy puppy play with the 6 month old Sapphire yet his more diminutive size did not intimidate Sapphire or arouse her aggression. In fact, Sapphire had never had the experience of playing as a puppy does before encountering Fritz. Sapphire's friendship helped foster Fritz' playful side and restore his joy in life after what he had been through, while Fritz became the first peer and real friend Sapphire had ever had. Fritz and Sapphire remained the best of friends for as long as Sapphire lived-she died this year of heart failure. Fritz initially seemed foloron and adrift without Sapphire but seemed to know she was ill and dying long before she actually passed away, and somehow he had made his peace with that fact which took us longer to accept. Fritz has now been incorporated into a new group of dogs led by Ashley, the paraplegic chowmix.

Emmie the senior doxie in the first photo was surrendered to Home for Life from a shelter in Iowa after she snapped at a volunteer. Emmie has the feminine version of Snoopy's "atttiude" . Dachshunds are underestimated, considered small lap dogs because they are short.In reality they are feisty dogs bred for hunting burrowing rodents and are relentless and intense about getting their way. For example, Emmie has dibs on a chair in the feline leukemia cattery where she lives,and there is no doubt among animals or staff that that chair belongs to Emmie. Everyone gives Emmie in her chair a wide berth, and she can bark in quite an intimidiating fashion if she is protecting her beloved perch. However, Emmie graciously shared her chair with Tootsie, a ladylike, elegant three legged calico cat from Louisiana who was feline leukemia positive. Tootsie's serene demeanor had a calming effect on Emmie,and they loved to recline together on the chair,keeping track of the activity in the feline leukemia cattery from this vantage point. Emmie is stern with the other small dogs who share space with her the feline leukemia cattery, but is always gentle and respectful to the cats. Tootsie has passed away from leukemia this fall, but started a precedent with regard to the chair and now other cats,having observed Emmie's frienship extended to Tootsie, know that she will allow them to share her chair too. As for Emmie, the companionship of the other feline leukemia cats helps fill the lonely space left in her heart with the loss of her friend Tootsie.
Posted by Home for Life Animal Sanctuary on Sunday, December 19, 2010